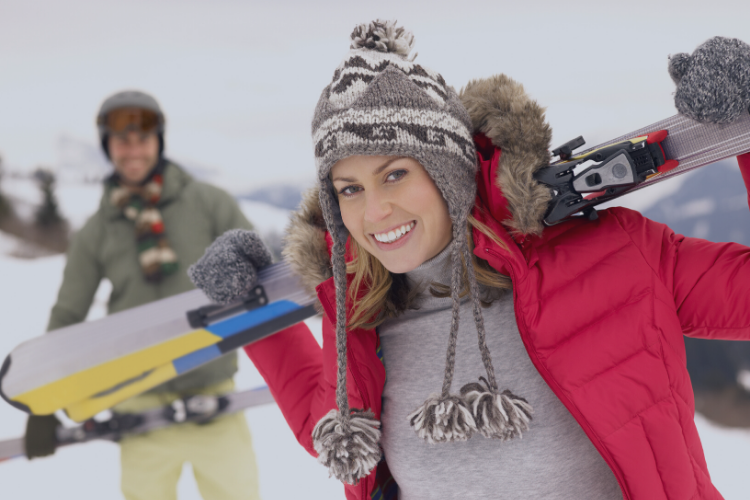 Broken bones tend to be more common in the winter months, or when doing activities that are on snow or ice. A 2016 study into hip fractures from the national hip fracture database (Diurnal and seasonal patterns in presentations with hip fracture, published in November 2016 in Age and Ageing) reported a 15.6% increase in hip fractures during December compared to other months.

It concluded that, overall, the number of fractures during snow and ice is more than double that of other periods. The most common fractures are those affecting the arm, forearm and wrist – consistent with slips and falls. Researchers stressed the importance of prevention.

But, can anything be done to prevent winter injuries? And, if so, what?

Black ice is a common cause of slips and falls and it is particularly treacherous because it is difficult to see. Slipping on the ice can lead to wrist and hip fractures, as well as lumbar strains. For older people, a fall of this type can have serious consequences as the risk of death within a year almost triples in the over 60s following a hip fracture.

It is not always possible to avoid slipping but to minimise the risk it is a good idea to put salt on paths around your home, to wear non-slip soles and to walk carefully, holding onto a rail for support wherever possible. Elderly people should avoid going out in very cold weather conditions if at all possible.

If it snows, another common cause of injury is shovelling the snow off drives and paths. If you have a bad back or high blood pressure it is a good idea to avoid this type of activity altogether, Even if you are relatively fit you should pace yourself and avoid doing too much.

Of course, winter injuries don’t just occur at home. One of the most common places for injury to occur is on the ski slopes.

These can be caused by high speed falls or collisions, landing badly after a jump, a sudden change of direction, which strains muscles, tendons and ligaments, or not using the correct equipment.

Tiredness and being out of condition is another leading cause of ski slope injury.

If you are heading off on holiday this winter, here are some simple things you can do to reduce your risk of getting injured:

For many people, skiing is a once-a-year activity and it’s important to know your limits and to remain within them. Avoid skiing on slopes that are above your ski level and don’t go off trail. It’s essential to listen to weather warnings and not to venture onto the slopes if a storm is forecast. Always obey warning signs.

Although the temptation can be to push ahead to make the most of your precious time on the slopes, tired muscles provide less protection for joints making them more prone to injury.

The cold weather puts extra strain on muscles, joints and ligaments, making an injury more likely. Warm up thoroughly to reduce your injury risk. Ideally you should start building up your fitness levels several weeks before you head off on holiday, although this is not always possible due to last minute bookings.

The best way to keep warm is to wear several layers of light, loose clothing. This is because layers adapt better to changes in temperature and keep you warmer than fewer layers of thick clothing. Water and wind-resistant fabrics will provide the best protection against the elements.

In December 2019, The Independent reported that more than 1,000 Britons are injured on skiing holidays after consuming alcohol. It said that skiers are 43% more likely to be involved in an accident after drinking.

Over the last five years, around 3.8 million people reported injuries on the ski slopes linked to drinking alcohol. It is important to avoid alcohol while skiing and to stay well hydrated.

If you do suffer a winter injury, seek help from an orthopaedic specialist as soon as possible, as continuing to use an injured limb could exacerbate the problem.

How High Does Health Come on Your New Year Wishlist?
7th January 2020

Your Total Knee Replacement: What to Expect
28th October 2019

This website uses cookies to improve your experience while you navigate through the website. Those that are categorised as necessary are stored on your browser and are essential for working the basic functionalities of the website. Those that are categorised as non-necessary are third-party cookies, in this case google analytics, these help us analyse and understand how you use this website but do not identify you as a user. These cookies will be stored in your browser only with your consent. You also have the option to opt-out of these cookies.
Necessary Always Enabled